Account of Pastrana including summary of pamphlet, "The Singular History . . ." Critical of origin story the pamphlet presents. Description of Pastrana's body and her performance, including the detail that she plays the guitar.

The unusual person who soon shall be shown here. To the audience, is the Mexican J.P., who shared the fate of many well known people, that nothing is known of the time and the place of their birth. The Americans, namely those who come to Europe with anomalies, own, as is well known, certain secrets in this geography. Not that they know the countries in the moon, such unpractical work they leave to their continental brothers - being cheap -, but they discover at the right time an Aztec town, or a cave in the district of the "Digger Indians ", where they find a 2-year old, strangely formed child. A small English brochure brought along by the guardian of Miss JP., talks about this import thusly: 'In Mexico, near the Gulf of California, there is a tribe of these Indians. They live nude in caves, and eat roots, grass, tree barks a.s.o., but no animal food. They have a large amount of tamed animals, such as bears and apes, and know no difference between them and themselves. They are 3-4 ft. Tall and weigh 80-90 pounds......

In 1830, some Digger Indian women went to a small pond in the mountains to bathe. On returning home, they were missing one of them. All efforts to find her were in vain and one assumed she had drowned. 6 years later, a rancher who had lost an animal in the mountains, heard a voice in a cave that sounded like a female Mexican. He went to Copala and with the help of some people he circled the cave and with tricks captured the lost woman. She told them, after she went lost, she fell into the hands of the enemy tribe, the Digg. Indians, who kept her tightly locked in this cave. But the place where she went lost, was several 100 miles from any living human beings, only bears and apes peopled the area. The woman was nursing a child she dearly loved, maintaining, though, it was not her own. She was taken in by the family of governor Sanchez in the State of Sinaloa, and the2-yr,old child was baptized Julia Pastrana.

So far the 'Singular History'. One does not have to put a critical knife to this story. It has obviously been invented, mostly that the sharp minded reader discover between the lines that here was a creature half animal, half human being, a thought The Yankee, who undertook this speculative business, could and would not so express it. According to physiologists and physicians, such ideas are totally without cause. This thought appears to the layman, because the unusual being is gifted with human speech and thought capabilities. We are working here solely with a monstrosity of the genus homo. A description, be it ever so exact, could not replace the view for our readers. Be it only mentioned, Miss P. is a small person, 4 ft. tall, of a pleasant body, nicely formed feet, normal arms, broad and full breast, but her hands, arms, breast and neck are thickly covered with black strong hair. Totally normal is her head, covered with a thick layer of fat, and in the formation of nose and lips, palate and tongue, there are peculiarities that fall into the area of anatomy. The layman is looking at unusual exterior, namely the face is almost totally covered strong black hair framing nose and mouth, and from the ears downward to the chin there grows a fully formed beard, as one know from the stereotypical beards of the Zuaves.

Julia Pastrana speaks English and Spanish quite well, plays the guitar, dances, and knows how to perform daily house work. According to the "Singular History", her "ideas of making money are limited, but they are beginning to form and it is hoped that in time she will reach the general 'money-getting faculty' of the human species. This capability is more important for the American than the 5 senses, and since not only her guardian owns them, but Miss P. Is showing worthwhile indications of developing them, one can trust the combined efforts of these two, that they did not miscalculate the curiosity of the Berliners. Among the songs mentioned in the 'Singular History' sung by Miss P., is one "Who will have me, who will have me as companion for life?" We believe we can assure that this dare-devil challenge is absolutely not dangerous. 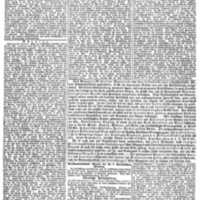 Click below to view an image using the Zoom.it viewer.