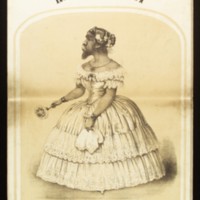 For decades, those interested in Julia Pastrana have relied on promotional brochures and several articles/essays that have become seminal texts. Although the articles and essays did include some preliminary research into Pastrana's life, there was much that went undocumented. In depth research into Pastrana's travels has revealed many primary documents that fill out our understanding of Pastrana as a sophisticated and successful performer. These documents help us understand that it is not accurate to portray her as just a victim. Rather, Pastrana was able to garner admiration and shift people's perceptions of her through her levées.

Although negative responses are also present, this chronology will focus on Pastrana as a polished and strategic performer. Information comes from the various newspaper articles, ads, broadsides, and images published during her lifetime. Digitization projects like the Fulton History project, Chronicling America, 19th Century British Newspapers, Austrian Newspapers Online, and ZEFYS allow us to access newspaper articles and ads. Moreover, Google's digitization projects include several documents important to Pastrana's career.

Considerable work remains to create a more complete account of Pastrana's career. My research into her performances in Poland and Russia is ongoing. Still, I have been able to account for approximately 360 dates associated with Pastrana's levées and travel. This chronology will summarize my research and lay the foundation for further analysis of Pastrana's career as a performer.